Have you read these neuroscience papers related to neural circuits published in March 2018? These must-read research papers look at a breadth of behaviors, including the encoding of danger, itch, pain, head motion, foraging, memory, and visual responses (in the auditory cortex, no less!) Check them out!

1. Encoding of danger by parabrachial CGRP neurons by

The parabrachial nucleus (PBN) lies deep at the border of midbrain and hindbrain, and is essentially part of the pons. Here they showed using Inscopix nVista in vivo calcium imaging that CGRP (calcitonin gene-related peptide) neurons in the PBN relay sensory signals that contribute to satiation and pain-induced fear behaviour across modalities. This suggests parabrachial neurons in mice interpret the feeling of fullness with negative valence and contributes to feeding cessation.

Toward a single-cell-resolution mouse brain atlas, they develop a fluorescent-protein-compatible, intensive tissue-clearing method combined with a tissue expansion protocol, CUBIC-X, which enables seamless imaging of the whole mouse brain at subcellular resolution. This opens up a great opportunity for a global analysis of gene expression and neural circuitry.

They show that head-velocity signals are physiologically separate in the brain in layer 6 (L6) principal neurons in mouse primary visual cortex (V1). They receive a diffuse, vestibular-mediated synaptic input that signals the angular velocity of horizontal rotation.

They demonstrate that cortico-basal ganglia circuits play a general role in learning to produce cortical activity that leads to desirable outcomes in a brain-machine interface task. They had previously shown that a brain-machine interface controlled by neurons in the primary motor cortex also requires cortico-striatal plasticity in order for animals to learn a novel neuroprosthetic action. Here they asked whether neurons in the primary visual cortex “could be instrumentally conditioned to produce arbitrary modulations of ongoing spike activity, and whether this abstract form of learning was dependent on the basal ganglia.” It was, which has important implications for understanding how the striatum shapes cortical responses.

Contrary to the hypothesis that a major function of 5-HT is to promote behavioral inhibition, they show that optogenetic activation of dorsal raphe nucleus 5-HT neurons increases foraging behavior (nose pokes) in a way that demonstrates persistence. The authors say these results contradict the behavioral inhibition hypothesis and support the notion that 5-HT promotes waiting by enhancing persistence in the face of uncertainty and delay. 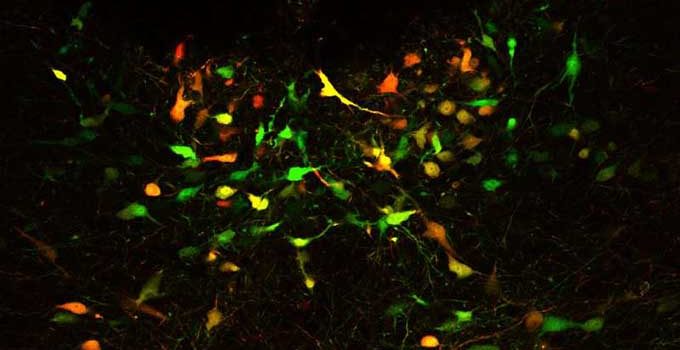 “These studies exemplify a connectivity-based strategy that targets a molecular brake of feedforward inhibition in DG–CA3 and may be harnessed to decrease time-dependent memory generalization in individuals with PTSD and improve memory precision in aging individuals.”

This is a good reminder how much we’re still figuring out about what distinct circuits in the primary sensory areas do, and here they show that, in mouse auditory cortex, the more mysterious deeper layers represent a locus of cross-modal convergence, containing many units responsive to visual stimuli. They “suggest that this visual signal conveys the presence and timing of a stimulus rather than specifics about that stimulus, such as its orientation. These results shed light on both how and what types of cross-modal information is integrated at the earliest stages of sensory cortical processing.”

They show that instead of a one neuron - one target area mapping hypothesis, individual neurons in the visual cortex target multiple areas in parallel. They used two anterograde anatomical approaches, whole-brain fluorescence-based axonal tracing and high-throughput DNA sequencing of genetically barcoded neurons (MAPseq), to map the long-range axonal projection patterns of individual neurons in the mouse primary visual cortex. Needless to say, this is fundamental connectivity knowledge. 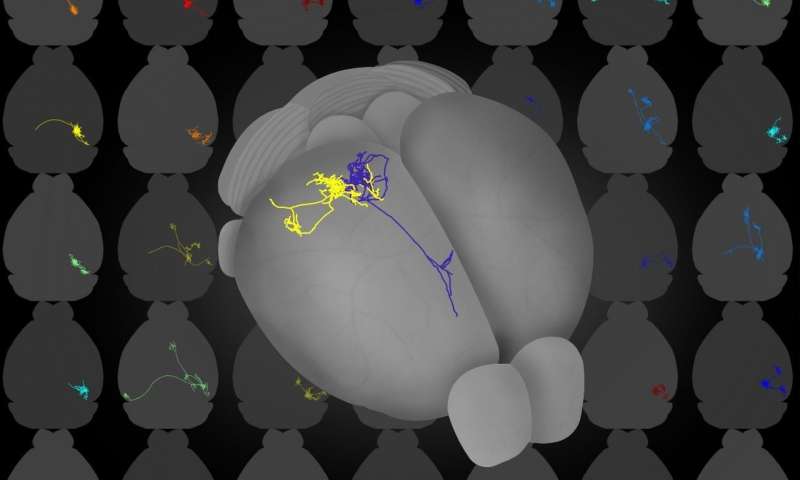 Maternal Immune activation increases synaptic strength in glutamate fibers from medial prefrontal cortex (mPFC) to basolateral amygdala (BLA), while postnatal immune activation decreases feedforward inhibitory postsynaptic responses by activation of interneurons in BLA by mPFC fibers. Both cases involve a change in the balance of excitation and inhibition, which has been implicated in autism spectrum disorder.