Thousands of scientists descended upon Berlin several weeks ago to attend Europe’s largest neuroscience conference. The Federation of European Neuroscience Societies (i.e., “FENS”) Forum is a 5-day, biennial meeting boasting a full schedule of brainy presentations, exhibits, and social events. This year FENS was attended by over 7,300 of Europe’s best and brightest brain explorers and I was lucky enough to be among them! In collaboration with Inscopix, I canvassed the meeting in search of the latest trends and findings in circuit neuroscience. I was also excited to find several posters relevant to those performing in vivo calcium imaging. Here’s a recap of my FENS highlights:

The conference center for FENS 2018. Image by Stina Börchers (@stina.biologista).

The Inscopix booth, manned by their energetic European team, was bustling all week! Drs. Diane Damez-Werno, Fabrizio Sitzia, and Jonathan Zapata caught up with their community members and showed off Inscopix’s new technological advancements. Among them was the Inscopix commutator, which allows for unrestricted movement during calcium imaging experiments. To showcase the tech, the booth displayed a commutator suspended over a rotating platform attached to a model of a mouse equipped with nVista 3.0. The new active motorized commutator compensates for animal movements to eliminate cable entanglement – allowing for in vivo recordings with minimal supervision. See my video of the commutator in action here.

There was also excitement surrounding Inscopix’s new Data Processing Software. The completely revamped software package is more intuitive and streamlined to aid in the transition from data collection to analysis. And the new software is INCREDIBLY fast! As someone with years of calcium imaging experience, I was astounded by the 10x processing speed in this update. Well done Inscopix! To learn more about the Data Processing Software go here. 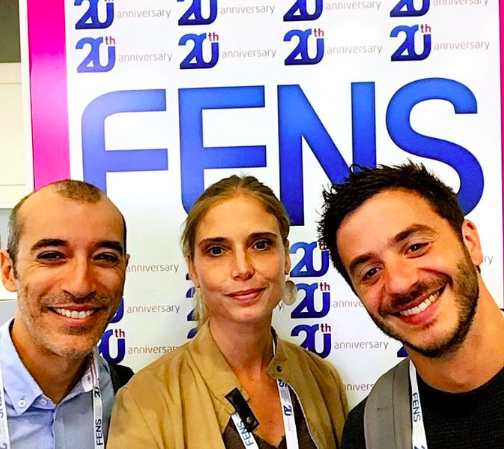 One consideration with 1-photon imaging is the removal of “background”, or signal arising from neuropil or out of focus cells (1–3). A promising new tool to address this issue is “comCaST” or “Compartmentalized Calcium Sensor Toolbox”, spearheaded by Abhinav Grama in David Cox’s Lab at Harvard. comCaST localizes calcium sensors to the nucleus or axon terminals by fusing them to histone or synaptophysin, respectively. The result for histone-fused GCaMP is nuclear-constrained expression and calcium signals devoid of neuropil contamination – and it has already been tested in vivo! This is undoubtedly a giant leap in the right direction for epifluorescent calcium imaging.

A new era of monitoring and manipulating neuronal circuits is officially upon us – systems and sensors are now available to allow for both simultaneously! Dr. Diane Damez-Werno presented Inscopix’s nVoke system for simultaneous calcium recordings paired with optogenetic manipulation. The nVoke system has a 455 nm GCaMP excitation (i.e., “EX-LED”) paired with a 590 nm LED for optogenetic stimulation of red-light sensitive opsins (i.e., “OG-LED”). Both ex vivo and in vivo experiments show minimal crosstalk between the 455 nm EX-LED and red-shifted opsins such as, Chrimson (4), NpHR (5), and JAWS (6). To view these controls and other applications of the nVoke system, read the newest peer-reviewed publication (7) from the Inscopix Team here!

I love rats and I was thrilled to find that Europe loves rats too. While walking the poster session aisles, I was struck by the large proportion of circuit neuroscience being conducted in rats in European laboratories, contrasting to the heavily mouse-focused research programs within the United States. Of course not all tools are suited for both rats and mice, and until recently, calcium imaging with miniaturized microscopes was one of them. However, Inscopix rolled out its nVista Rat Application Module a year ago and it’s clear that Europe is ready to put these modifications to good use. One poster I visited used Inscopix tech to record activity in the rat prefrontal cortex and then using their recordings, reconstructed the field of view in 3D. By doing so, recorded neurons could be anatomically identified which leads to the possibility of later being able to investigate cell characteristics with immunohistochemistry. Leading the development of this novel method was Philip Anner, Georg Dorffnner, and Thomas Klausberger from the Medical University of Vienna.

Another trend that I loved was exploring motivation and circuit function in complex behavioral environments. In a naturalistic setting, cues that guide motivated behavior— such as seeking reward and avoiding punishment— often occur simultaneously. Yet how competitive stimulus interactions (i.e., when both positive and negative cues occur at the same time) are encoded within the brain is still understudied (8). One poster caught my eye by Laurie Hamel in Rutsuko Ito’s Lab at the University of Toronto. In their studies, they interrogated the role of projections from the medial prefrontal cortex (mPFC) to the nucleus accumbens (NAc) core is operant responding to discriminative appetitive, aversive, and competitive stimuli using DREADD technology. I won’t spoil the results but I’m excited to see paradigms like this on the rise! 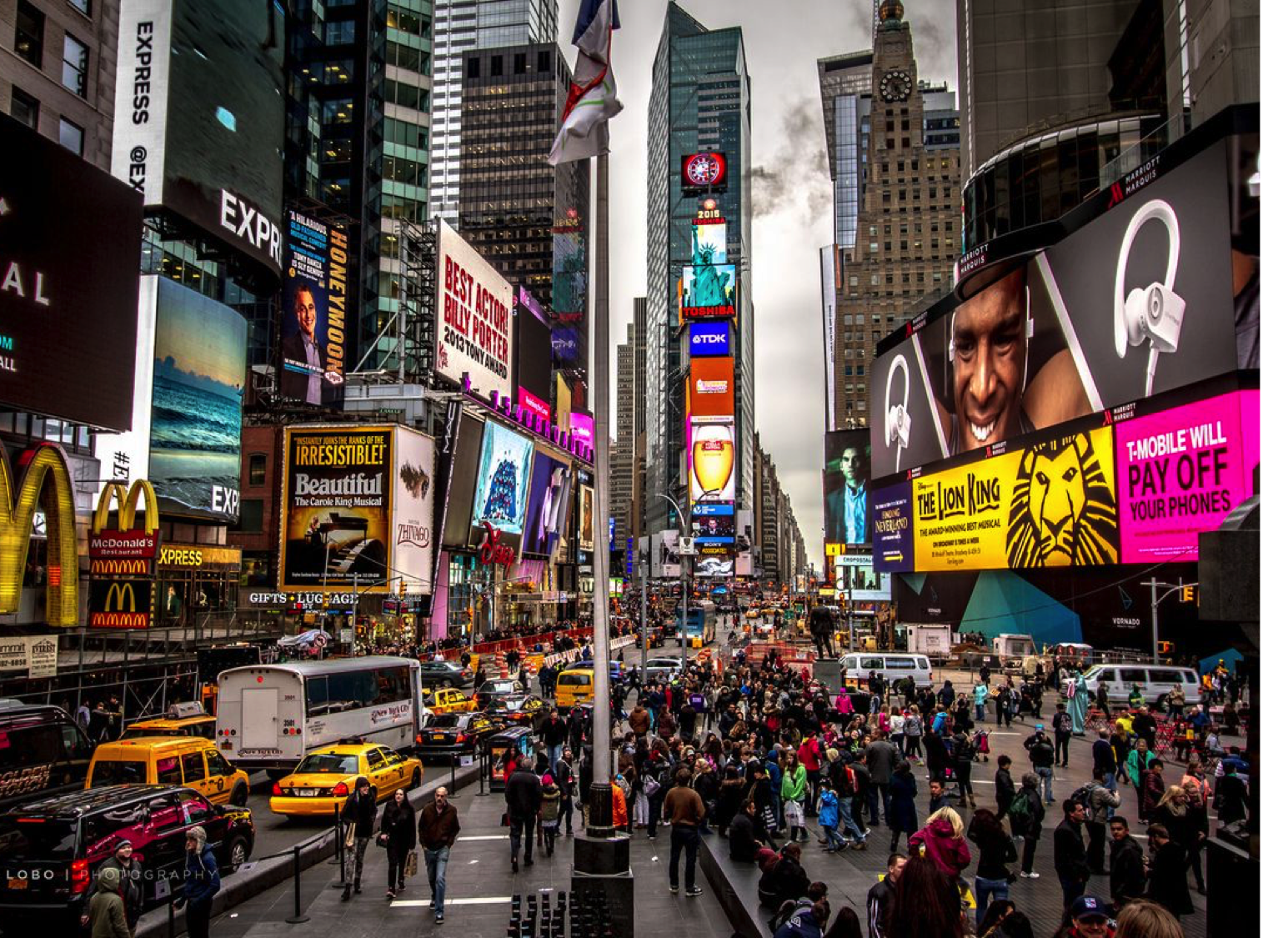 Times Square in New York City is a great example of a complex environment. Image by Luis Sousa Lobo.

Of course when it comes to circuit neuroscience, dissecting neuronal diversity still reigns supreme. One beautiful example of this is an ambitious line of work being completed in Konstantinos Meletis’ Lab by Moritz Weglage* at the Karolinska Institute. They seek to unravel the roles of various subpopulations of dorsomedial striatum (DMS) principal neurons in goal-directed action by imaging their activity in vivo using Inscopix miniaturized microscopes during an alternative choice behavioral task. While D1- and D2-expressing neurons have been imaged previously (9,10), the dynamics of mu-opioid receptor (MOR)-expressing “striosome” neurons and their functional role are less clear (11). By taking advantage of transgenic mouse driver lines to allow for targeted GCaMP expression to either D1-, D2-, or MOR-expressing neurons, these recordings will give us fresh insight into DMS subpopulation encoding— and I will be eagerly following along!

Another study promising to shed some insight on behavior-specific neuronal encoding is work by Ignacio Blasco at University of São Paulo, Brazil. The periaqueductal gray (PAG) is a brain region that has been implicated in a number of defensive behaviors (e.g., escape, avoidance, freezing predation / attack; 12,13), as well as social behavior (14). But whether individual neurons flexibly code for multiple behaviors or whether subsets on neuron uniquely represent individual behaviors is unknown. To explore this, Blasco and colleagues examined ensembles of PAG neurons that were activated (via immediate early-gene expression c-Fos) during predation versus conspecific social interaction. They found that ~40% of lateral PAG neurons were activated by both stimuli but subsets of neurons encoded a single stimulus. I’m looking forward to seeing the connectivity of these distinct ensembles and how valence ties into PAG population dynamics. For example, do positive versus negative social interactions activate different cells? We will have to stay tuned to learn more! 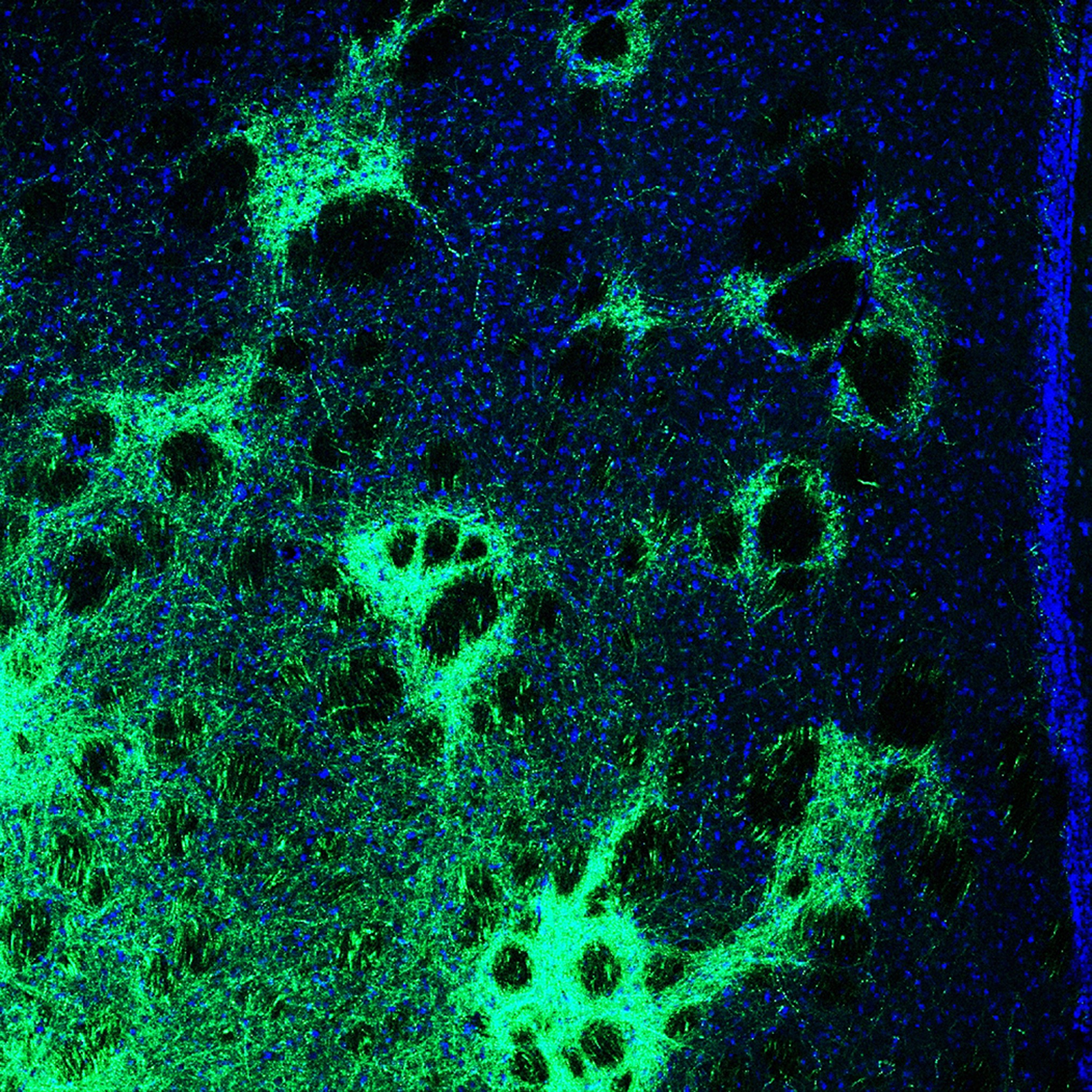 Projections to striosomes in the striatum. Image by Ben Saunders.

Until next time FENS!

FENS 2018 was a wonderful whirlwind of truly impressive science. If you couldn’t make it this year, I hope you enjoyed these highlights and I look forward to seeing you all at FENS 2020 in Glasgow, United Kingdom.

*Moritz Weglage acknowledges assistance from other members of the Meletis Lab, including Iakovos Lazaridis and Emil Wärnberg.