How do our brains represent the most basic of social cues, like whether a member of our species is male or female? This is a question two labs have been asking in mice, and they’ve employed some ground-breaking methods to do so. One lab, the Anderson lab from Caltech, published their results on October 19th in Nature. And last week, the Dulac lab from Harvard published their results in Cell. They both used Inscopix nVista to perform calcium imaging of large neuronal populations over days while naive and experienced males or females interacted with conspecifics. This technology gave them the power of recording over 200 individual neurons in their brain area of choice, and to get individual and population-level activity. The Anderson group imaged neurons in the ventromedial hypothalamus, downstream from where the Dulac group imaged in the media amygdala. 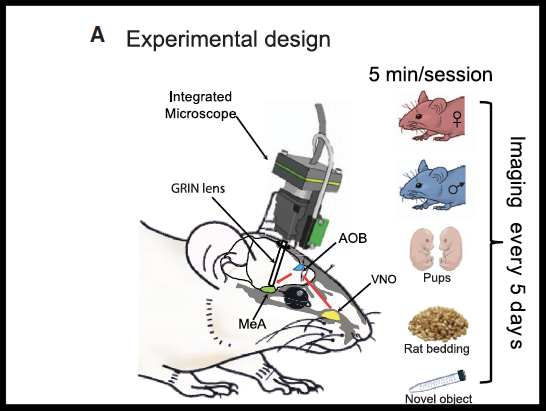 Most scientists thought male and female recognition would be represented by hardwired circuits, but instead they found that social experience, and specifically direct contact with the opposite sex, resulted in experience-dependent changes to the neural ensembles representing sex-specific social cues. In the Anderson group paper, they found that naive males represent males or females with indistinguishable neuronal ensembles in the ventromedial hypothalamus. But exposure to a female allowing direct contact sculpted sex-dependent differentiation in both the behavior in response to male or female intruders and the neuronal ensembles representing males versus females.

Movie from Ying Li at Harvard showing large-scale calcium images in the medial amygdala when a male mouse is exposed to an intruder male.

The Dulac lab showed that the shift of neuronal ensembles correlating with changes in behavior toward males or females was sex-specific also in the medial amygdala. In other words, sexual experience triggered lasting and sex-specific changes in medial amygdala activity AND the ventromedial hypothalamus. The Dulac lab group also went on to show that sexual experience drove the formation of sex-specific neural ensembles, enhancing the discrimination of social cues from the opposite sex in both males and females. This changed persisted and developed further over the month after each animal was separated from its mating partner. They also looked at a role for oxytocin in males in this process.

These two paper are science at its finest. When two labs independently study the same behavior and use the same technology in different brain regions and come to similar conclusions, it bolsters our confidence in their findings. By identifying these common underlying principles of how the brain works, scientists lay the foundations for robust conceptual advances in neuroscience.