Every month we pool together some of the most read-worthy papers in neural circuits, and for the month of November, we have another impressive list. Please have a look, and as always, your feedback on these studies or others that didn't make our list but make yours are welcome! (As it were, Neuron published today a paper on a novel septo-hippocampal rhythmic GABAergic cell type, so check that out too!)

This is a very nice study asking how oxytocin-receptor-expressing neurons in the parabrachial nucleus regulate fluid homeostasis. They generated mice expressing Cre recombinase at the Oxtr locus, and used slice optogenetics, electrophysiology, and in vivo calcium imaging with Inscopix nVista to show that oxytocin-receptor-expressing neurons in the parabrachial nucleus are key regulators of fluid homeostasis that suppress fluid intake when activated, but do not decrease food intake.

The authors asked how disrupting RNA m6A methylation, the most prevalent internal mRNA modification, affects brain development. In mutant mice, they showed that disruption of the persistence of non-methylated transcripts lead to defects in the cell cycle of radial glia cells that both serve as neuronal precursors and act as scaffolds to guide migration of neurons to the appropriate layer of the cerebral cortex. This caused disorganization of the cerebral cortex, and prevented normal circuit formation in cognition-related areas of the brain in mice. Finally, the researchers looked at neuronal cells derived from human stem cells, and found that the development of human neuronal precursors is regulated by m6A methylation.

A silicon probe, called Neuropixels, can precisely measure the activity of about 200 individual neurons simultaneously across cortical layers, adding another means for studying functional neuronal circuitry.

4. Ancestral Circuits for the Coordinated Modulation of Brain State

A comparative neuroscience study in which they developed a method to globally screen for cell types involved in behavior by integrating brain-wide activity imaging with high-content molecular phenotyping and volume registration at cellular resolution (MultiMAP). They recorded from neuromodulatory cell types in behaving zebrafish and mice, and found in both cases multiple monoaminergic, cholinergic, and peptidergic cell types linked to alertness and activity in these cell types was mutually correlated during heightened alertness. The authors say these experiments establish a method for unbiased discovery of cellular elements underlying behavior and reveal an evolutionarily conserved set of diverse neuromodulatory systems that open up future studies into the circuits.

5. Molecular and cellular reorganization of neural circuits in the human lineage

This is an intriguing comparative analysis of transcriptomic data revealing global, regional, and cell-type–specific species expression differences between human and nonhuman primates. They saw human-specific differential expression patterns including those encoding transcription factors, ion channels, and neurotransmitter biosynthesis enzymes and receptors. One example included a rare subpopulation of interneurons expressing dopamine biosynthesis genes, which they found to be enriched in the human striatum and neocortex. They propose evolutionary modifications in gene expression and the distribution of neurons associated with neuromodulatory systems may underlie cognitive and behavioral differences between species.

They examined the three-dimensional organization of subcerebral projection neurons (SCPN) in layer 5 of the mouse brain at the microcolumn level. They saw a cellular lattice system composed of cell type–specific microcolumns. The authors propose this lattice system is a neuronal architecture common to cortical functions as a brain-wide system of modular, repeated synaptic circuits and discrete cortical output channels.

They show how innate risk-avoidance arises from accumbal dopamine receptor neurons tuned by orexin signals. They found that an excitatory drive to D2NAc cells emanates from lateral hypothalamic orexin cells and that D2 cells in the nucleus accumbens are essential for innate risk-avoidance mediated by spontaneously released orexin. This study points to a novel hypothalamus–accumbens circuit to study in action selection.

The authors show that craniofacial nociceptive neurons directly synapse with noxious-stimulus-activated lateral parabrachial neurons (PBL), which in turn project to multiple limbic centers processing emotions and affects. They show this monosynaptic pathway is both sufficient and necessary for craniofacial-pain-activated aversive behaviors. This work has implications for why craniofacial pain may be experienced more severely than pain mediated by body sensory neurons. 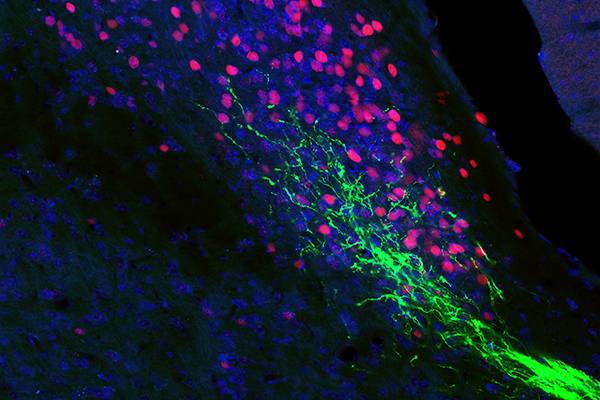 They created an opsin that is specifically expressed in the soma of neurons. They showed high-performance using both 2P and 1P stimulation approaches, but 2P power was necessary to enable millisecond control of cortical neuron activation in mouse brain slices. They also controlled individual cells with 3D photoactivation in brain slices, and demonstrated functional mapping. Very cool.

Recent genetic studies have reported that haploinsufficiency of ARID1B causes autism spectrum disorder. Here they generated Arid1b-knockout mice, and found that Arid1b haploinsufficiency leads to an excitation–inhibition imbalance by reducing the number of GABAergic interneurons in the cerebral cortex. They rescued ASD-like behavior using a GABAA-receptor positive allosteric modulator, linking lower numbers of GABAergic interneurons, and therefore huge changes in neural circuitry, to behavioral outcomes. How precisely does the excitation-inhibition balance change?

How do neurons integrate the many synaptic inputs they receive? Here, they investigated this question using two-photon imaging of layer ⅔ neurons in ferret visual cortex. They showed that synapses cluster on a scale of about 5-10 microns based on both activity and functional properties. This is an excellent microscale study of synaptic organization, taking visual response properties into account.

Read more here and here, and watch a video here

What are the circuits mediating arousal during sleep apnea? Here Saper and colleagues focused on a subset of glutamatergic neurons in the external lateral parabrachial nucleus, called PBelCGRP cells, known to show activity in response to elevated CO2 levels. They used optogenetics and chemogenetics and showed that the PBelCGRP cells wake up the brain and are necessary for arousal.

Monkeys with previously amputated limbs were trained to control a robotic arm. The authors then detailed the changes that took place in both sides of the brain used to control the brain-machine interface and the remaining, intact limb using a multi-electrode array. The results showed both areas created new connections to learn how to control the device, even several years after an amputation.