Must-Read Neural Circuit Papers in May 2018

Unbelievably, June is here, which means we have a bountiful crop of must-read neural circuit papers from May. Below, I’ve listed those that stood out based on relevance to the Inscopix community. The first two in the list used Inscopix technology and present results with clinical significance for neurodegenerative motor disorders. There are also excellent tour-de-force studies from the Tye lab and Anderson lab that relate to observational learning, and aggression that results from social isolation. I’ve included a little summary with each paper, and links to the original paper plus any science communication that came out on the study. Happy reading!

In this exciting paper with clinical significance, they used the Inscopix nVista calcium imaging system to uncover the neural dynamics in the indirect and direct striatal pathways that are present during parkinsonian behavioral states in the mouse 6-OHDA model. They saw striking spatial patterns in the neural activity that support the rate-model hypothesis. By giving the parkinsonian mice L-DOPA and imaging in the striatum, they revealed that parkinsonian and dyskinetic states produce opposing patterns of neural ensemble activity. Dr. Mike Ehlers explained the significance this way, “The striatal circuits of motor control are critical for disease states such as Parkinson's disease, and restoration of neural ensemble function holds great potential as a circuit endophenotype for therapeutic development.”

They filmed three-dimensional movements and used machine learning to parse the movements into patterns lasting only a few hundred milliseconds apiece called "syllables." They used Inscopix nVista imaging in the dorsolateral striatum to observe neural activity during natural movements. They found that every time mice switched behaviors, the activity of indirect and direct striatal pathways increased.

When they looked at syllables, however, they found that the balance of activity between the two pathways differed. For some syllables, the direct pathway dominated; for others, the indirect pathway did. By imaging during natural behavior, they observed ensembles of neurons that displayed regular and predictable patterns of activity during particular syllables.

Finally, they induced lesions in the striatum and saw while mice were able to display all the separate syllables seen in normal mice, they failed to sequence these movements correctly rendering the animals incapable of reaching the arena's opposite side to avoid the scent of a predator. The findings could help inform new treatments for movement disorders.

When ventral midline thalamus (vMT) neurons are activated before, or during, stimuli that simulate predator threats, mice shift from saliency-reducing behaviors, like freezing, to saliency-enhancing reactions to those threats. Whereas looms typically induce freezing, activation of the vMT or the vMT→medial prefrontal cortex pathway induced tail rattling—a behaviour associated with aggression. This has implications for understanding disorders of arousal and adaptive decision-making, such as phobias, post-traumatic stress and addictions. 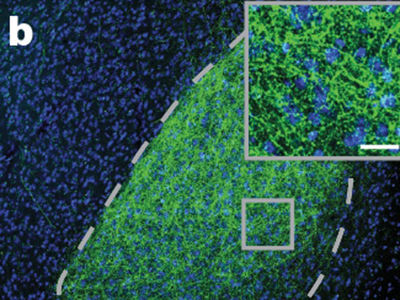 A fascinating paper on social behavior revealing the role the anterior cingulate cortex and basolateral amygdala play in observational learning with electrophysiology, optogenetics and phototagging. “Although we have known the importance of these two brain regions in social, emotional, and decision-making processes, this study provides unprecedented and beautiful circuit-level accounts of how the two systems work together to make social learning possible,” said Steve Chang, who was not involved in the research.

The Anderson lad had previously shown in Drosophila that the neurochemical tachykinin played a role in promoting aggression in socially isolated flies. In mice, the tachykinin gene Tac2 encodes a neuropeptide called neurokinin B (NkB). Tac2/NkB is produced by neurons in the amygdala and hypothalamus. Here they found that chronic isolation lead to an increase in Tac2 gene expression and the production of NkB throughout the brain. “However, administration of a drug that chemically blocks NkB-specific receptors enabled the stressed mice to behave normally, eliminating the negative effects of social isolation. Conversely, artificially increasing Tac2 levels and activating the corresponding neurons in normal, unstressed animals led them to behave like the stressed, isolated animals.

The researchers also inhibited the function of Tac2 and its receptors in multiple specific brain regions. They found that suppressing the Tac2 gene in the amygdala eliminated the increased fear behaviors, but not aggression, while conversely suppressing the gene in the hypothalamus eliminated increased aggression but not persistent fear. The results imply that Tac2 must increase in different brain regions to produce the various effects of social isolation.

"The approach used here allowed us both to compare the effects of different manipulations of Tac2 signaling in the same brain region, as well as to compare the effects of the same manipulation across different brain regions," says Anderson. "The rich data set generated by these experiments revealed how this neuropeptide acts globally across the brain to coordinate diverse behavioral responses to social isolation stress."

Though the work was done in mice, it has potential implications for understanding how chronic stress affects humans.”

Previous work has implicated activation of hypothalamic ventral premammillary nucleus (PMv) in intermale encounters, yet its role in aggression remained unidentified. Here they showed that dopamine transporter-expressing neurons in the hypothalamic ventral premammillary nucleus (PMvDATneurons) are a central component of this circuit, with the animal’s behavioral responsiveness to PMvDAT manipulation depending on its aggression phenotype. They established a link between PMvDAT neuronal activity and aggression levels, suggesting an important role for this neuronal population in aggression.

They found that activity correlations across cell classes (for example, parvalbumin to vasoactive intestinal peptide (PV–VIP) cell pairs) could be as high as those within a class (for example, PV–PV, VIP–VIP pairs). Thus, functional cell ensembles or subnetworks can span multiple cell types. Importantly, however, they “observed a substantial within-cell-class heterogeneity in responses aligned to onsets of behaviorally relevant grating stimuli, running, reward and odor delivery, including response increases and decreases, as well as in learning-related response changes of PV, somatostatin (SOM) and VIP interneurons in visual cortex... The challenge for future studies is to establish the extent to which the heterogeneous behavior of single cells is captured by the diversity of cell types within an interneuron class and to determine any brain-state- and region-specific differences in their activity.” 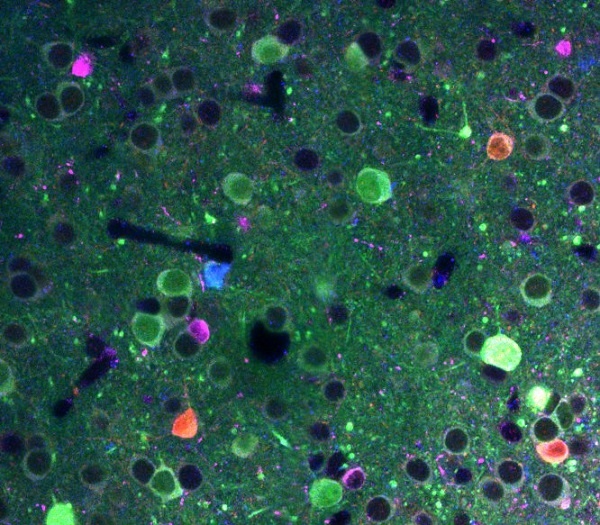 reveal a previously unknown role of 5-HT at striatal circuits. This is the first demonstration that signaling by 5-HT receptors provides a control mechanism of Hebbian plasticity (t-LTD) at thalamo-SPN synapses of the direct pathway. These synaptic effects of 5-HT are mediated by the postsynaptic 5-HT4R subtype, which shapes bAP-evoked dendritic Ca2+ signals through the regulation of BK channel activity and which is preferentially localized at axo-dendritic thalamostriatal synapses.

From the significance statement: “The central extended amygdala has been implicated in anxiety-related behaviors, but the underlying mechanisms are unclear. Here we found that somatostatin-expressing (SOM+) neurons in the central amygdala (CeA) controls anxiety through modulation of the stria terminalis (BNST), a process that is mediated by an increase in dynorphin signaling in the CeA. Our results reveal circuit and cellular dysfunctions that may account for maladaptive anxiety.”

Significance statement: "The discovery that neurotransmitter identity is regulated by activity in the adult mammalian brain during a stress response raises questions about the extent and function of this plasticity. Specific synapses are associated with the release of a particular neurotransmitter or transmitters on the basis of evidence obtained under a single set of conditions. Transmitter switching endows the connectome with greater plasticity: Activity-dependent revision of signaling provides another dimension of flexibility to regulate normal behavior. Changes in transmitter identity are also positioned to contribute to diseases of the nervous system. Neurotransmitter imbalance has long been implicated in common neurological and psychiatric disorders, provoking interest in transmitter switching as a therapeutic tool for patients."