Sitting in a movie theater, we eat buttered popcorn from a bag with eyes fixed on the giant screen in front of us. Our hands move from bag to mouth without much conscious thought about the brain processes at work. Somehow, motor cortical areas in the brain coordinate movements of muscles while we remain engrossed in a film. But if we were to research precisely what goes on under the hood, we’d find out the neuroscience is unclear. While the brain areas controlling forelimb movements have been identified, they haven’t been mapped in sufficient detail to resolve the debate in the field about whether these motor and somatosensory areas are organized in a hierarchical manner, or if they are organized as a map of the natural behavioral repertoire. With a new study by researchers from Harvard Medical School and National Institutes of Health (NIH)) out in Cell, the neuroscience of goal-directed motor skills just got a lot clearer. 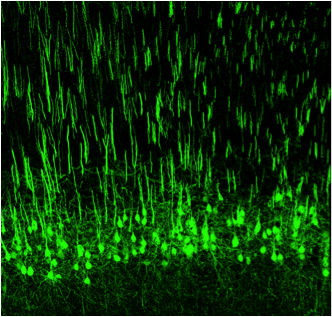 Scientists in this new study peered into the part of the brain that controls forelimb movements. They selectively imaged the corticospinal neurons (CSNs) in the cortex that send projections all the way to the spinal cord, and they did so while a mouse moved its forelimbs to retrieve food pellets. To achieve this imaging feat, scientists from Kuan Hong Wang’s laboratory at NIH applied the Inscopix solution -nVista- for imaging the activity of large numbers of neurons expressing the genetically-encoded calcium indicator GCaMP6 in freely moving mice.

From a technical perspective, what is interesting in this study is that the authors image calcium dynamics in corticospinal neurons, not in their soma in the deep Layer 5, but in their apical dendrites which terminate in the most superficial layer 1. Traditionally, this would have been done by inserting a GRIN lens or a prism probe into the cortex to image somal dynamics, but in this case, a simple cortical window in the skull overlying layer 1 suffices. This approach thus opens up a new application for elucidating neural circuit dynamics and coding with Inscopix’s nVista miniature microscope technology. They were also able to manipulate specific CSN circuits with optogenetics and DREADDs.

These methods allowed them to look at the spatiotemporal activation pattern of CSNs while mice reached for food, giving them insight into the cortical regions controlling distinct aspects of the task at the cellular level. They identified spatially-defined neuronal populations in rostral and caudal forelimb areas that project selectively to different muscles and are active during distinct phases of movement. To convey the significance of the study, Xuhua Wang, co-first author said, "By analyzing the corticospinal neurons and their projections, our study delineates the organizational principle for cortical control of goal-directed motor skills. These results might have implications in designing tailored neural repair strategies and brain-machine interface devices.” Indeed, their findings reveal a topographic map organized in a way that emphasizes more parallel processing than hierarchical, and provides a neuronal circuit basis for a possible map of the natural behavior.