Since this is my first blog post, I think a brief introduction is in order! I am currently the Director of Translational Science at Inscopix, overseeing our scientific programs with a translational and preclinical focus - which includes such activities as product and application development and scientific partnerships with academic and pharma/biotech groups. Before joining Inscopix as a Lead Scientist just under 5 years ago, I had spent the previous 13 years (PhD and 2 postdocs) training as a systems neurobiologist, utilizing viruses, electrophysiology and optogenetics to trace, monitor and manipulate circuits within the visual cortex of non-human primates (e.g. macaque monkeys). Toward the end of my academic training, I became very interested in developing and applying tools and techniques that could directly relate circuit-level brain structure and function in the behaving animal for a better understanding  of neurological disease and its improved treatment. Inscopix, given their powerful imaging platform and potential for application in translational and preclinical settings, was a perfect match for me.

One area of product and application development that I immediately took lead on was translation of nVistaTM miniscope imaging to non-human primate (NHP) models, such as marmosets and macaques. This, of course, fit nicely with my academic background and was a key objective for the company given the importance of NHP models for translational research. Indeed, NHPs have a behavioral repertoire and brain structure highly similar to that of humans, and recent advances in genome editing are quickly making them viable genetic models of human disease. Translation of the technology to NHP would enable exciting new capabilities to chronically record large-scale neural circuit activity at cellular resolution, with cell type specificity, from genetically and anatomically defined cell populations during complex and clinically-relevant behaviors. Unfortunately, though, application of new technologies in NHPs often faces considerable challenges and can therefore be slow to develop. I know this from personal experience. Optical imaging techniques, including two-photon calcium imaging, have so far been no exception. Nevertheless, we were set on giving it a try and ready to meet the challenges head on.

Over the last couple of years, we have seen enormous progress in applying nVista miniscope imaging to NHP studies. The first demonstration of this was proof-of-concept imaging from Hideyuki Okano’s laboratory at Keio University and RIKEN in Japan, in the primary motor cortex of behaving marmosets (Kondo et al., Cell Reports 2018). Most recently, we at Inscopix have led efforts to establish nVista imaging in macaques. This work was conducted at the California National Primate Research Center (CNPRC) in collaboration with investigators from UC Davis, Berkeley and UT Austin, and recently became available as a preprint at bioRxiv (Bollimunta et al., bioRxiv 2020). In the preprint, we demonstrate proof-of-concept plug-and-play calcium imaging in behaving macaques with months-long stable recording capability, allowing populations of individual neurons to be tracked longitudinally. We report that simultaneous bilateral calcium imaging from dorsal premotor cortices exhibited dynamics selective to the animal’s direction of reach and allowed decoding of the animal’s motor behavior. Finally, we provide detailed protocols regarding preparation of the animal for calcium imaging, so that others can start to integrate this powerful new approach into their active research programs. 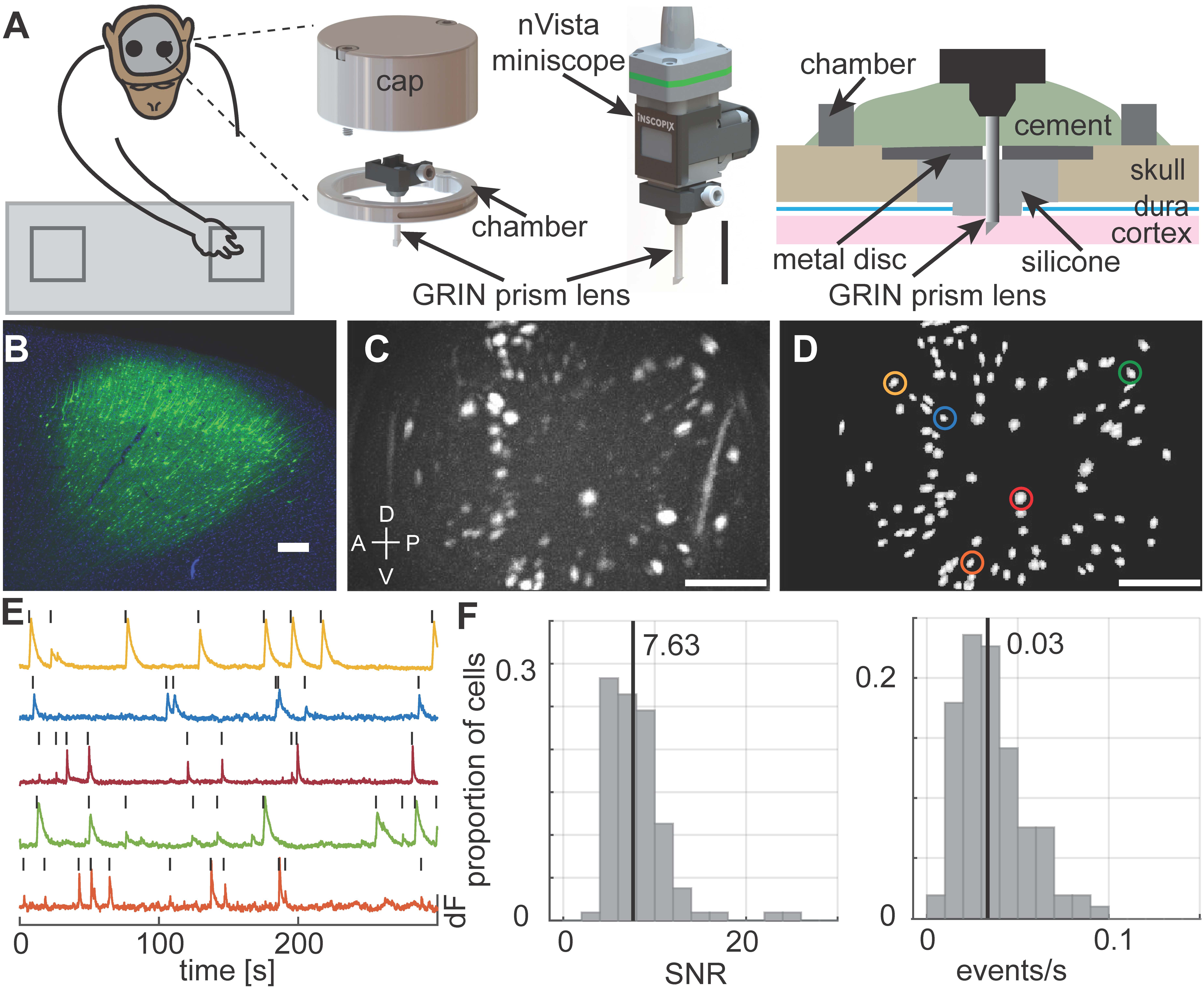 It has been a blast working on this project. The startup environment at Inscopix cultivates a spirit of innovation and teamwork that I believe played a large role in how quickly we were able to make nVista imaging in macaque a reality. The success of this project relied not only on my fellow neuroscientists at the company, but also on our optical and electrical engineers and our data scientists, all making important contributions along the way. Not all companies are willing to invest in product and application development for the NHP research market, but Inscopix gets the importance of NHP models for understanding human brain function and disease and, therefore, is fully committed to equipping NHP researchers with the latest, most powerful neural circuit technologies to fuel their future breakthrough discoveries. We are already working hard on the next important developments to our imaging platform that should lead to widespread adoption among NHP labs and an ever-increasing array of applications. I can’t wait to see what our collaborators and customers will do with it next!