Progress in science depends on new techniques, new discoveries and new ideas, probably in that order.

Recently, Professor Ed Boyden from MIT tweeted Brenner’s quote, and a discussion ensued about whether or not the quote actually reflected the way science progresses, or at least the way it should progress. Most agreed, but some disagreed, like NeuroSyntheSys who said:

But others pointed out examples of how technology led to new ideas, such as optogenetics, RNAi, and CRISPR. Indeed, my experience is that scientists push questions as far as existing technologies will take them, until they need to either develop new methods or wait for others to do so and jump on collaborating with them.

Here we highlight ten papers featuring Inscopix miniature microscope technology, nVista, that collectively show how groundbreaking technological advances can lead to new foundational knowledge about the brain. These select papers dissect the neural circuit basis of learning and memory, and capitalize on Inscopix's prowess in enabling the imaging of large-scale neural dynamics with cell-type specificity and single-cell resolution during unrestrained naturalistic animal behavior. The findings obtained could not have been possible without the ability to record during free behavior, and the pairing of imaging with activity manipulation methods in some cases.

Here are the links and summaries of the 10 learning and memory papers: 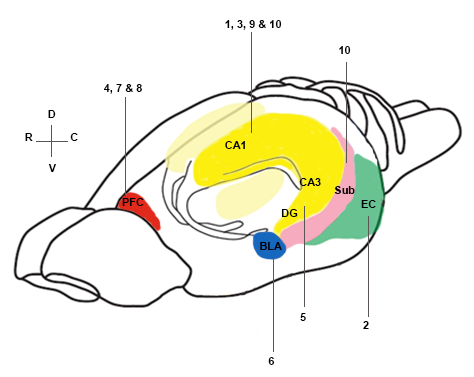 Figure: Summary of diverse brain regions, both superficial and deep, imaged using Inscopix miniature microscope technology to study learning and memory. The numbers refer to the papers listed in this post.

(7) Engrams and circuits crucial for systems consolidation of a memory by Kitamura et al. 2017. Science

(10) Distinct neural circuits for the formation and retrieval of episodic memories by Roy et al. 2017. Cell